Rare Earth Elements: How the U.S. Shoots Itself in the Foot

Being an engineer, I love to talk about rare earth elements (REEs).  I can be very chatty about the magic of their F orbitals, what it means to their quantum mechanical properties, and so forth.  I have done that to my poor, long suffering wife of 38 years, and after she snaps out of her tech induced trance she quickly changes the subject to one that she knows something about.  Still, if you look around the house, rare earths abound in the energy efficient appliances, in the fluorescent light bulbs, in LED lighting, in your cell phone displays, in your computer disk drives, in batteries, etc.  Here is a longer list:

Okay, I know the list was getting way too geeky.  At least I spared you the periodic table.  But there is a point.  Rare earths have become a part of our everyday lives.  They are relevant to all of us, even if most don’t realize it.

Rare earth production is for all intents and purposes the property of China.  That is where they are mined and refined.  It’s also where the devices that use them are made.

China is king of the rare earth supply.  But why is that?  There are other geographical sources of rare earths.  REE’s are found in the ground almost everywhere.  India, Brazil, Russia and other countries also have minable concentrations.  Here in the U.S., we have a greater supply of rare earths than China has.  In the U.S. there are 14 states that have significant rare earth deposits.  Go to the beaches of northeastern Florida.  There are monazite-sand deposits right there on the beach.  Okay, I am getting geeky again.  Monazite is the ore for rare earth metals.  They are also found in the tailings (leftovers) of titanium mines, which means they can be found in other states, like Virginia, as well.  This map shows the minable U.S. deposits of REEs: 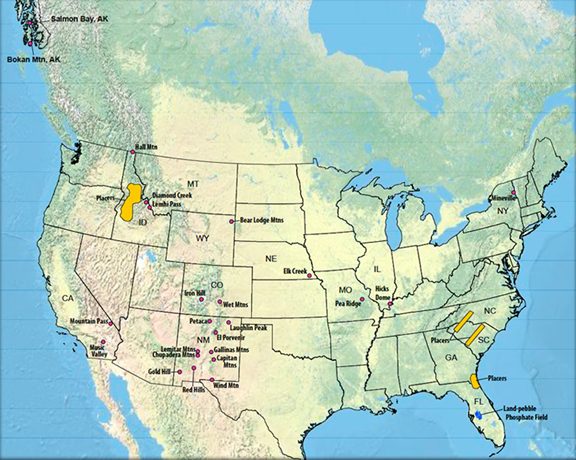 So if we are that rich in rare earth deposits, why do we have to rely on China for our rare earth supply?

Thorium is a weakly radioactive element found with almost every rare earth deposit.  When a miner digs out rare earth deposits he digs out thorium with it.  There are not enough uses of thorium to do anything more than put it back in the ground.  But he can’t.  Our nuclear regulations will not allow him to put it back where it came from.  He can pick it up, but he can’t put it right back down.

To understand just how weakly radioactive thorium really is, start with the idea that there is a fixed amount of energy in each gram of thorium.  Left to radiate forever half of that gram will be done radiating 14 billion years from now.  The sun will become a red giant and consume the earth before that happens.

As shown here, eventually thorium decays to lead.  (Yes dear, I am being geeky again.  I am what I am.)  Along the way for each step, either an alpha particle (a helium atom) or a beta particle (an electron) gets thrown out.  These particles (the radiation) don’t go very far.  A little bit of just about anything will stop them.

Our government does not know what to do with its own stockpiles other than expensively store them forever.

The scene pictured above is Los Alamos National Labs.  It has 3200 metric tons of thorium-nitrate in 20,000 drums.  Note that the man in the picture is not wearing a radiation suit.  It seems that the barrels provide plenty of shielding from the radiation that comes from thorium.  The lab wants to ship these barrels to Nevada.

What to do with the thorium does not worry China.  This is why China is the king of the rare earth production in the world. They are storing thorium cheaply.

Since China does not over-regulate thorium as the rest of the world does, China is the king of the rare earths.  They have further decreed that their rare earths will be for China first.  If a U.S. company wants a rare earth item manufactured with uninterrupted supplies of rare earths then that company has to bring their manufacturing line and their intellectual property to China.

In 2012 Barrack Obama articulated the World Trade Organization’s case against China and their rare earth policy:  “We want our companies building those products right here in America,” Obama said. “But to do that, American manufacturers need to have access to rare earth materials which China supplies [without having to commit our manufacturing jobs to China too]. Now, if China would simply let the market work on its own, we’d have no objections.”

With their lax environmental rules, China is creating a lot of pollution in their mining, refining and production of rare earth elements.  At the other extreme, our draconian over-regulations make rare earth production here in the U.S. prohibitory.  There has to be a balance.  Since China currently has no motivation to change its trade policies, if we want manufacturing to return here to the U.S. we have to adopt regulations that make economic sense.

The infrastructure to mine, refine and separate the rare earth elements does not exist here in the over-regulated U.S.  If and when some economic balance is restored to our environmental regulations, it will still be years before that infrastructure is built and the U.S. can compete with China on a global scale.  Raising public awareness is the way to begin to push our government to stop strangling the common sense out of ourselves.  (See dear, I am a geek on a mission to boost America’s economy!)

Jeff believes in the Individual's ability to excel when liberty and freedom of choice are protected. Also believes in the Community's ability to take care of the vast majority of its own issues and needs when the federal government leaves the Community's resources and sphere of control alone. State and local choice produce better results than centralized federal control. https://necessaryandpropergovt.wordpress.com/
View all posts by Necessary and Proper →
This entry was posted in Contributed by 'The Ed', Our Political Economy and tagged China, economics, mining, politics, rare earth elements, rare earth policy, Rare earths, refining, Regulations, thorium. Bookmark the permalink.

8 Responses to Rare Earth Elements: How the U.S. Shoots Itself in the Foot