Posted on September 20, 2016 by Necessary and Proper

There are no good principled reasons to oppose term limits. A bogus reason people on the right use is: “When we get a good fiscal conservative in office, we want to keep her/him there to keep fighting for us.” I say BS….if conservatives can’t keep a good stream of emerging conservatives coming to consistently replace incumbents, we’re not worth our salt.

A bogus reason people on the left use to oppose term limits is: “The more experienced our political intellectuals become, the more we need them to lead all of us so America can solve its societal problems permanently.” I say BS….It is human nature that each of us is corruptible. Upon taking office, the human nature of politicians doesn’t magically change. In fact they seem to become even more corruptible. Why? Unchecked power funded by vast treasury resources is intoxicating, and threatens the sovereignty of individuals. Government as our overlord is a dangerous replacement for God.

The problem is that enacting federal term limits will require a Constitutional Amendment. So far, all 27 amendments have been originated by Congress, and then ratified by the states. That route won’t work here. It goes against the instinctive interest of federal politicians to accept term limits, just as it goes against the interest of scuba divers to cut off their own air supply.

The only way federal term limits are going to happen is by an Article V ‘intervention’ by legislatures of 2/3 of the states to hold a convention for proposing amendments to the U.S. Constitution. To limited government advocates, this is seen as a politically daunting route, and it is. Americans today lack patience — they don’t want to try taking on a daunting national task if it has no chance to succeed on the first try. Technology and the daily feeling of the modern rat race have afflicted us with PADD (political attention deficit disorder).

Slowing / stopping / reversing the alarming growth rate of government control will only happen through state-demanded amendments that limit the federal government. That will only happen if we gain ground one state at a time, and don’t give up after 1 or 10 or 100 failed attempts. The movement to abolish slavery took over 3 decades (1825 to 1860) of tireless conviction to build strength so that decency and morality could gradually gain favor against the plan by the southern Democrats to expand slavery into the western territories acquired in the Louisiana Purchase. It is both a triumph of moral resolve and a tragedy of stubborn arrogance that a bloody Civil War was needed to banish slavery from our land.

It will take a similar long-term commitment to overcome the entrenched federal ruling class who thinks they know better than us what’s best for us. We must gradually build support for ending the lure of Congress and the Federal Judiciary as a permanent career, seat by seat, in state house after state house. To finish it, we have to start it, and keep at it. Peacefully, but steadfastly. 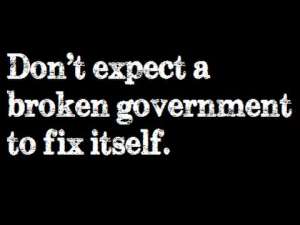 Jeff believes in the Individual's ability to excel when liberty and freedom of choice are protected. Also believes in the Community's ability to take care of the vast majority of its own issues and needs when the federal government leaves the Community's resources and sphere of control alone. State and local choice produce better results than centralized federal control. https://necessaryandpropergovt.wordpress.com/
View all posts by Necessary and Proper →
This entry was posted in Politics in Practice and tagged Article V, Convention for Amendments, Term Limits. Bookmark the permalink.